I've been a long time user of your ADSL1 service as I cannot get ADSL2 in my area. Lately within the past fortnight, speeds on standard websites are fine according to speedtests. However, using P2P has been extremely slow even for files with a high number of seeds and users which has never happened before until recently. Just wondering if Exetel are deliberately shaping P2P speeds...and if not what can be done about it?

I think it depends a lot on what you are trying to download. A couple of minutes ago I fired up Deluge to collect an Ubuntu CD iso file - it is a well supported torrent, open source, so no copyright fears, that I have often recommended as a speed test. We are well in the peak time and it rapidly maxxed out my home connection. The stats are in the attachment. 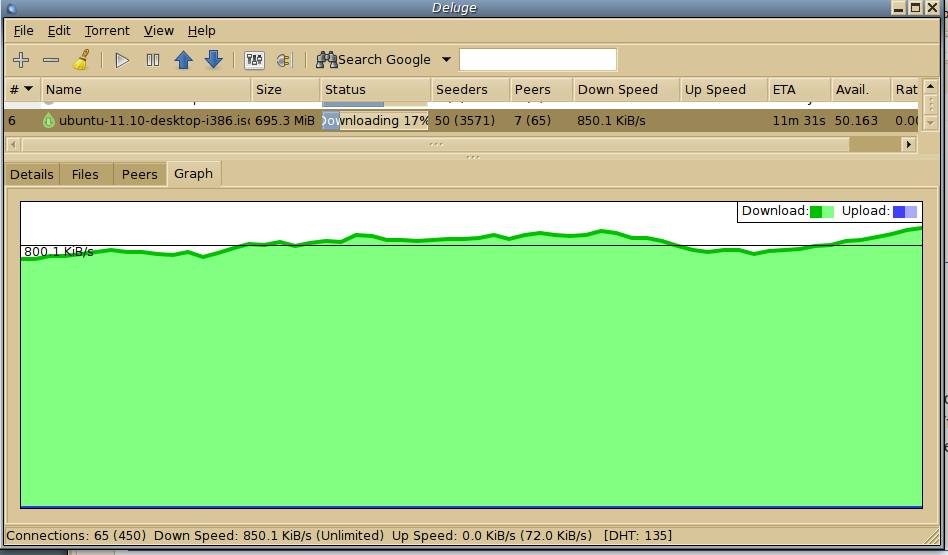 Thanks Daz, I'll give your particular file a go. Last week I attempted a different Ubuntu file without much luck either as it dropped to between 1-300kb. I just find it odd and a little suss that this has never happened before until recently.

Also Daz, what's your optimal settings for downloading? (I'm on the 8000k ADSL1) I've set mine at around 112 max connections per file and 18kb upload speed.

Are any staff able to confirm that P2P speeds are NOT shaped?

Just gave both tests a run -

There's definitely something inconsistent happening as the first file you linked struggles around 400kb/s while the second is around 600kb/s...both of which are far from my past normal and consistent 750-800kb/s...

Deluge has some useful info for setting torrents up at http://dev.deluge-torrent.org/wiki/User ... thTweaking. For these tests I'm running 450 max connections; no down speed limit; uploads speed restricted; as you can see in the screenshot.
Top

May I ask what speed your connection is?

I've set mine roughly to optimal according to that site (and a wiki which I found over a week ago) without much luck still.

Really seems like something's been shaped which I'm hoping isn't the case..
Top

i have also noticed slow p2p speeds and im on telstra (gear). the torrents are very well seeded and before they routed through aapt i was getting 1.2 to 1.8 mb/s now im getting around 250kb/s max

there is a whirlpool form going on here where there is a bit of talk about it http://forums.whirlpool.net.au/forum-re ... ?t=1892372

if exetel are putting a limit on p2p it would be great if they said so, instead of all this speculation going on. maybe exetel hasnt done it but aapt ?

+ i have done all the error checking i can do my end.
Top

Continuing with free stuff, I found a real snail - I've got the Debian operating system DVD coming down painfully slowly at the moment. Noteworthy is that there are only 5 sharing, all in Europe, and none faster than 7.5 KB/s. A couple are only 0.1KB/s. You can't get if nobody is giving.

[edit] 11pm so I resumed the Debian iso torrent which had been paused. 85 on board now, one Yank and the rest European (lots of Russians) and it's zipping along quite nicely at over 400 KB/s.
Top

Running the Ubuntu test again now and it's terrible - 350kb/s ugh. I'm really hoping an Exetel staff can confirm and be transparent with their answer on P2P shaping as otherwise this long term customer of almost a decade will be saying goodbye.

...do Exetel staff even browse these forums? I've called their hotline several times and the Sri-Lankan team haven't been able to give any straight up answers which leaves me with a sense of suspicion.
Top

reags, I kicked off the Ubuntu 11.10 here again at 9.40am , still using Deluge, and after a slow start it ran at about 550 - 600 KB/s. It is a more diverse group of countries active now, plenty of Americans, with a disproportionate number of μtorrent users (Windows) running slowly. Nothing came from Australia.

For a contrast, at the moment (10 am) usenet with 8 connections is getting 7100 kbps at the network card.
Top

Tried Ubuntu 11.10 again a few minutes ago, at home. I'm maxxed out, doing 850+ KB/s. This time I monitored the network interface. Here is the iftop instantaneous display for a short period while the torrent warmed up. It shows the individual connections, and the rates/sec averaged over 2 sec, 10 sec and 40 sec.

PS: I did look at the Whirlpool reference linked above, and I'm obviously like the posters there who haven't noticed any degradation. I admit that I no longer use torrents a lot, and I haven't been after English language multimedia. 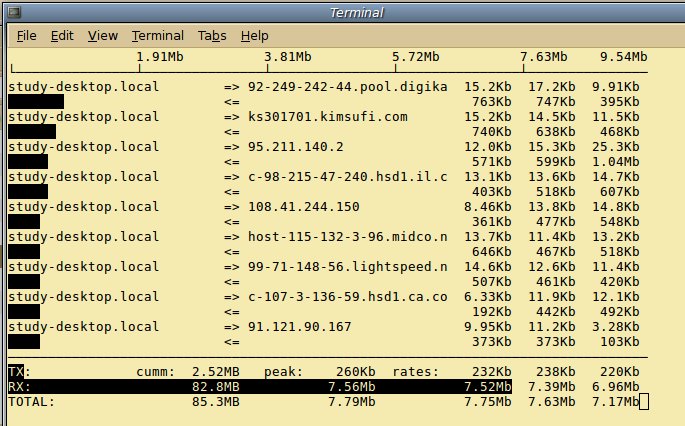 The reason as to why some feel that their p2p traffic is slower than usual is because we no longer cache P2P. This means that you are now directly downloading them from the source or google cache.
There is no shaping done on the Exetel network.
"Helping Making a Better World"

Shoner, the end of the cache was announced to customers in a newsletter, and was even commented on by some posters on the Whirlpool thread Yoshi_900 linked. I hope this explains the problem for those affected.
Top

thanks for looking at the link Dazzled.

still i am unsure that the cached being removed is the issue. i could be wrong however. i think it may have to do aapt. however i will hang around and continue reading and maybe something else will come up that i didnt think about.
Top
Post Reply
49 posts