Instructions: Features: For now its an apk; I will put in marketplace after a bit more user testing

I've been using Call Meter NG for android which has been fine.

This has been upgraded to Call Meter 3G, which is still in beta but available from the Market.

Using Call Meter 3G, I can group my calls/sms into a cap and monitor as a group. Just need to get programmer to allso allow data to be part of the cap.
Top

samarium wrote:I've been using Call Meter NG for android which has been fine.

Both widgets do use a small "1x1" widget and a ProgressBar though. Still I think my using the 'secondary' progress indicator (a 3/16th alpha black overlay here) to show the position in the billing period is nicer than the separated indicator bar placed across the top in CallMeter NG and at the bottom on Exetel's home page. 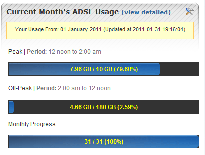 Sure they measure different things, but they are both android usage wigets.

I was just letting people know what is out there, I don't have a barrow to push either way.
Top

That's cool. I am with vodafone for data and working on a similar widget to read my plan usage from their servers. (And their system is nowhere as easy as exetel's is!) I found that apps that measure data use from the phone (a) don't exactly match up, and (b) can't or don't keep up with the complex formulae used by the carrier.
Top

I don't need accounting to be accurate to the last byte. Near enough is good enough to highlight gross inaccuracies that can then be discussed with exetel.
Top

I tried out the exetel_usage widget with my V19 plan, but it claimed that I had entered invalid account details.

I then tried it on my ADSL login. It accepted the account details, but then displayed an error instead of usage data.

Since this was not developed by Exetel, we really cannot comment on it.

However it appears to be a really handy widget.