I see this topic has come up on several occasions, and once with the same header.

Calls to some numbers pstn and sip, and occasionally mobile returns engaged tone at my end, but the phone rings at the other end. Some recipients find this quite disturbing, especially if I call 5 or 6 times...........

Do not yet have a suitable vehicle to try a soft phone, maybe I can setup over the weekend.

ATA is a PAP2 NA Packet size is set to 0.04
System was working well good enough up to the server incident.

Screen shots are proving difficult. I could be forum technique ignorant.

Tried uploading as a pdf and a word doc. Forum does not allow....

I usually attach a .png from screenshots. If it's a very big file reduce it as for a photograph. Press the Upload Attachment button at the bottom of the post-a-message typing box, browse to the file and press Add
Top 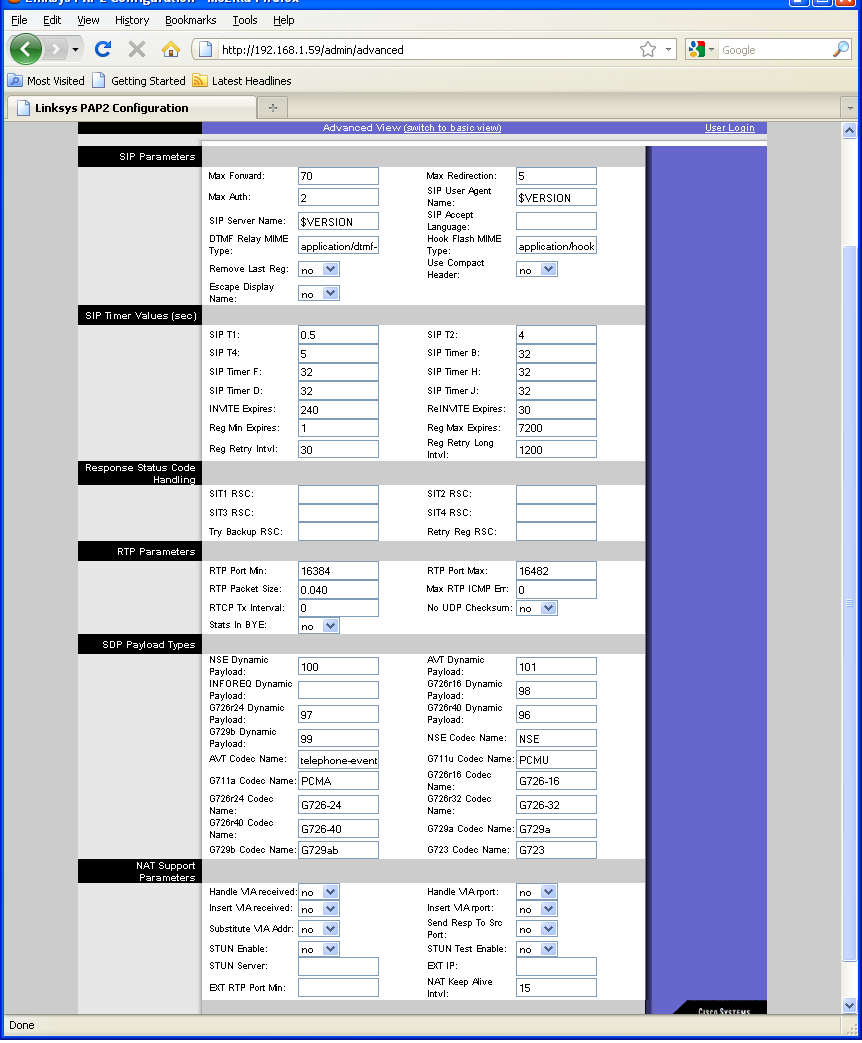 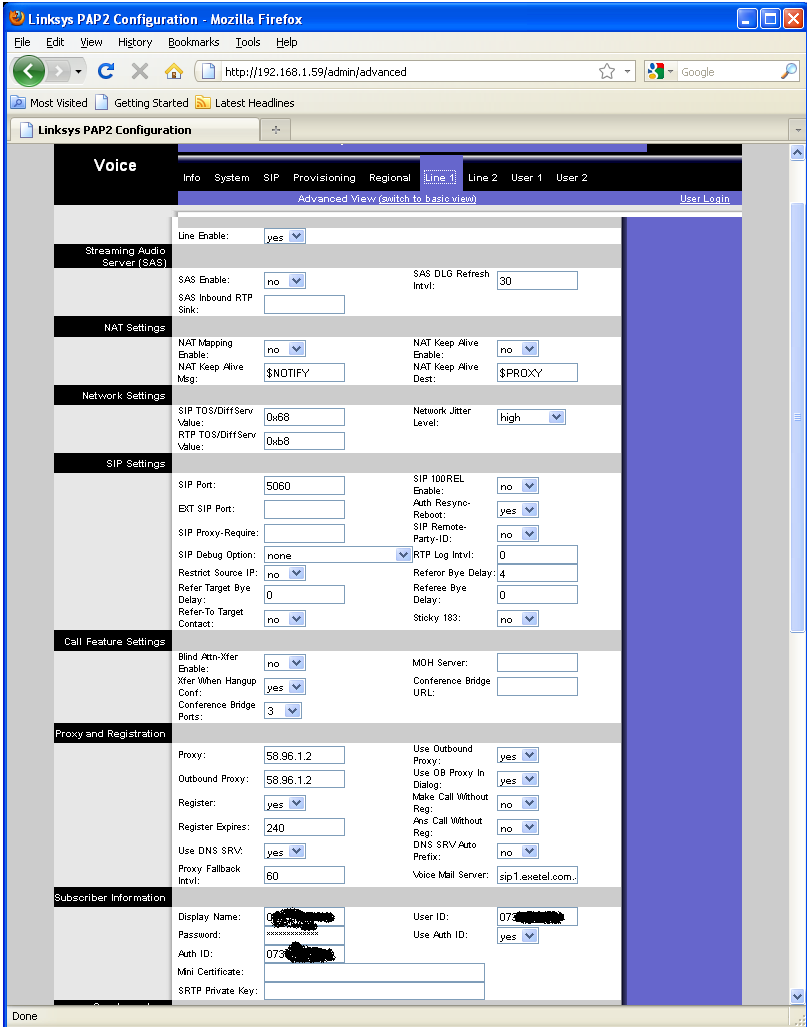 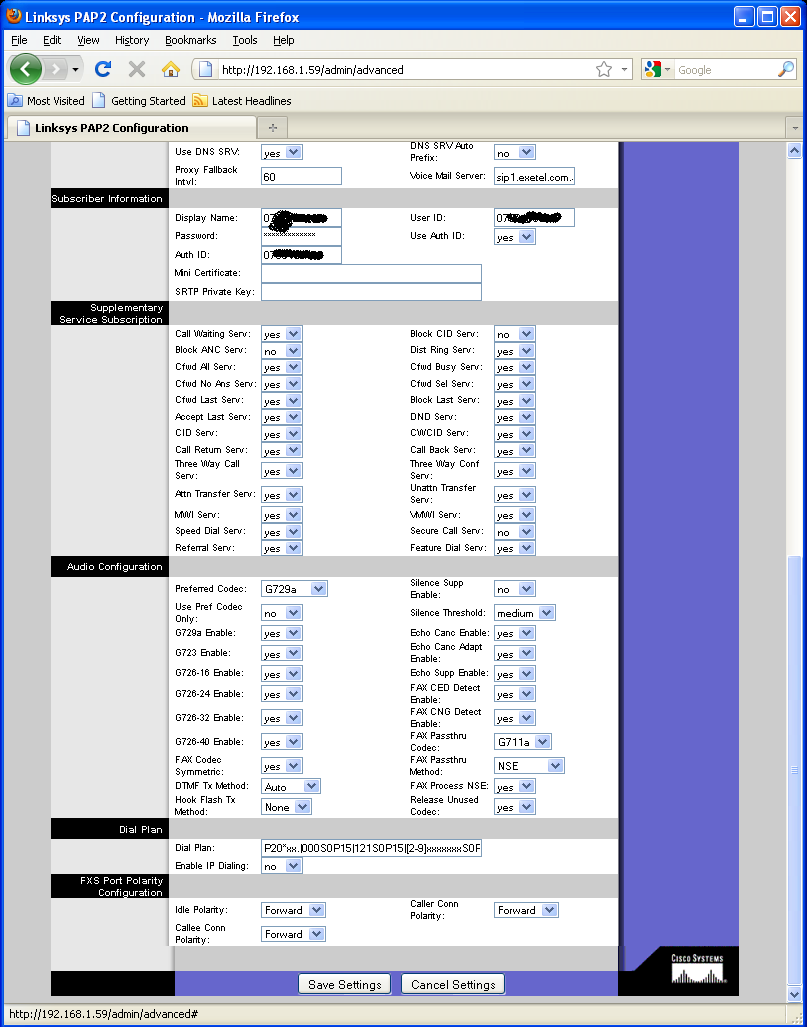 In the NAT Settings, try setting NAT mapping enable & NAT keep alive both to "Yes"
In the Subscriber Information set the Use Auth ID to be "No"

Maybe a few other bits, but thats all I noticed on a quick look.
Top

Thanks for your suggestions Baldrick.

Unfortunately still no cigar, with the first problem number I called still being unconnectable.

I checked the manuals reference to NAT settings, and enclose below. I can do that now.

Has this issue been solved - I seem to be having the same problem.
Top

Has this issue been solved - I seem to be having the same problem.

I set up a faktortel account on the spare port of the ATA and am using that when the exetel voip stops.

I have tried various settings on the ATA, after scouring the manual. There has been no noticeable effect.

Am currently trying a dial plan with (S0)delay cancellations, maybe it is a timing thing. I did have generous delays without the cancellations, as this seemed to work much better during the server issue.

I think it is on the exetel side as in the billion issues.

The problem is sporadic

The problem is affecting the two other people I know and communicate with regularly, and who have PAP 2 ATA's (2* PAP2 T, 1* PAP2 NA)

I never have a problem calling voice mail.

It is working much more consistently this week than in previous weeks. But from past experience, this could change at any moment.

I have been waiting for a consistent failure so as I can lodge a fault ticket.

bugger, I only have an exetel account and hardly use it for outbound calls - but when you do, and it doesnt work I dont really have many options other than to use a mobile for what will most likely be a 1hour call.

I use billion hardware also.
Top

This was my situation as well, which is why I set up the faktortel account.

I had the same problem for the last 2 months with my PAP2T, i couldnt call out, i had an engaged tone soon as i picked up the phone...
Now I finally resolved my problem, all i did was changed the setting under "LINE 1" which is now "Use Outbound Proxy: NO " and it worked fine, am now able to make outgoing calls
Top

had the same problem for the last 2 months with my PAP2T, i couldnt call out, i had an engaged tone soon as i picked up the phone...

This is different to the problem I was having. Mine was billion registration like.

I gave up on the changes, thinking the problem was probably at the exetel end and all I need do is wait.
This seems to have worked, the system has been going quite well. It would seem the problem has gone. Though I am very reluctant to put that in writing.

I have checked, am using Use Outbound Proxy: YES