I seem to be having some issues with my peek downloading amount
it is currently 7am 22/08/2010
and yet I am being told that I have downloaded 1467.42 MB during peek time today even though I have not hit peek time yet today
Top

What plan are you on? If one of the latest, then your peak time may be 2-8am, which means if you downloaded from midnight to 2am, then that was peak today...

Otherwise there has been an issue with the usage metre, see the other thread.. viewtopic.php?f=303&t=36768
http://www.saferoz.com.au
First Aid * Fire * Safety
Top

I dont believe that the issue is 2am - 8am off peek
as I am set to 12am - 12pm off peek
unless I have been changed without being notified and my usage meter still displays this: 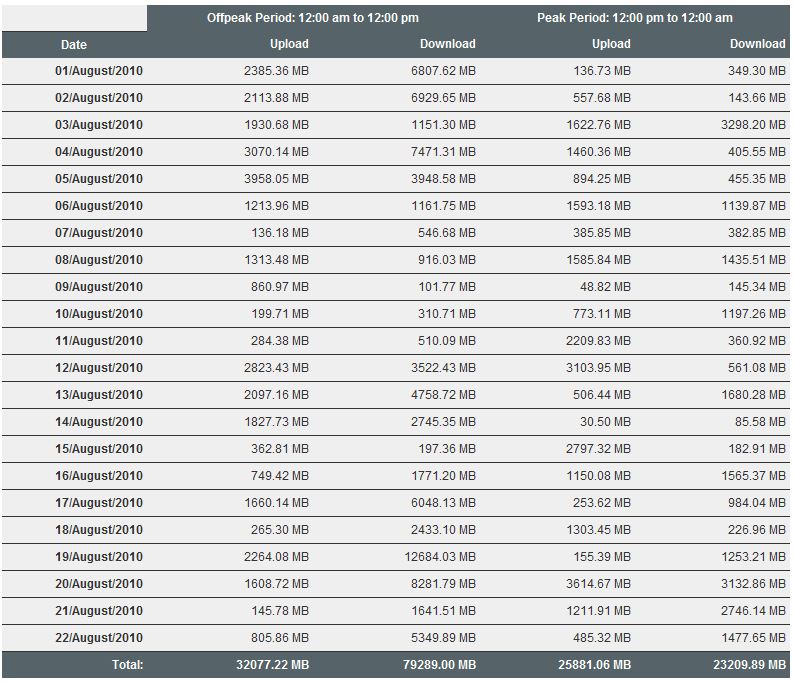 Same thing happened to me too i just checked and it states i am over my quota but my peak does not hit till 12 pm and all my downloads were before 12 pm. where do we report this? I just sent a usage question from the members page stating this hiccup.
Top

im having the same problem.. i just checked. my last 3 days most of my offpeak has been counted as peak. im on an old 12 - 12 offpeak plan.
Top

Same is happening to me, Gone up at least 10GB last night (I dont have that much left)
Top

I'm in the same boat.
All of a sudden my download is over quoter during peak time. I checked my download at 8:30am and I had downloaded 5G in PEAK when my peak time does not commence until 12noon.
Logged a job, I am sure exetel will fix the issue but still annoying that it has blocked me in the meantime.
Top

Reiterating: there is a known issue at the moment with usage reporting: viewtopic.php?f=303&t=36768
I am a volunteer moderator and not an Exetel staff member. As with all forum posts, mine do not constitute any "official" Exetel position. Support tickets may be logged via https://helpdesk.exetel.com.au or residentialsupport@exetel.com.au
Top
Post Reply
8 posts • Page 1 of 1