You want twice for less?

Surfn Chick wrote:James, just my opinion and just saying you shouldn't really being answering posts with comments like that.

So i should let people disparage the company my famiy built? Linton's never let that happen.
Top

I'm trying to figure out if this is a good deal for heavier users.
From what I can tell, going from V49 to the largest new plan I save $10, if I'm under all spend limits. Otherwise we are worse off (but not relative to other offerings).
Other plusses is that for a traveller (me) global roaming looks like a great deal - $1/minute compared to Telstra at $3/minute for the same service. Roaming Data looks to have come down to $500/GB - $0.50 per MB for Exetel(Optus) compared to $3.00/MB for Telstra. A roaming data pack at Telstra gets you to $0.28/MB depending on which pack you get.

Does Exetel sell roaming data packs?
Is the $39 plan the largest plan now?
Is there any international call allowance on any plan?

Can someone check this logic and maths?
Top

39.99 plan (Exesim Plus) is the largest plan that we offer now. However, we do not allow an international call allowance on any of the new plans.
Top

HI James I have 5 mobiles with exetel but only 4 of them have had the email sent to me so I presume that the one that I have not had an email for will stay as it is.
It is the M15 plan.
Top

BradM wrote:We have just received the same e-mail notice for our services.


1. It is distasteful to be forced off a plan. Exetel does this far too often. It is inconvenient for customers, and it punishes user loyalty.
Every time we are forced off a plan, we seriously review our relationship with the supplier. Few suppliers force customers off plans as frequently as Exetel does; it is a feature of the way Exetel does business.


2. Exetel is giving less than one calendar month's notice to customers being forced off the Z15 plans. This is inconvenient and unfair. It probably violates some written terms and conditions, not that violating anything in writing has ever bothered Exetel. That, also, is a feature of the way Exetel does business.


3. The 100% price increase for a few percent more voice and 33% less data is extraordinary.

The claim that the "recommended" plan is "4G" as opposed to the Z15's "3G", a claim of the carrier Optus, is laughable in practice in terms of mobile internet performance.
Over a long period of time on the Optus network, some via Exetel and some direct with Optus, we have seen the Optus network become saturated and the data performance fall. At locations around Australia we regularly visit, we see worse Optus mobile performance and increassing signs of saturation, year after year.
It is clear that Optus are milking the existing infrastructure to saturation point, and not caring about the customer experience.

Many Optus cell stations, regadless of their top potential performance, deliver an actual data rate somewhere around 2G standards. In locations we visit the data rate is a maximum of about 150 kilobits per second, and often much less.
To call this network "4G" - admittedtly Optus' claim repeated by Exetel, is misleading.


4. We note that Exetel is doing nothing at all to reward loyalty of existing customers; we get the same deal on this that a newcomer to Exetel would get.
In other areas, Exetel has moved into the "me, too" camp of punishing loyalty like most other telco's.
Cheaper plans are now available than the Exetel ADSL plan we are on, but that is "for new customers only" and we don't see Exetel forcing us off our more expensive plan onto a cheaper plan.
Reward newcomers, and punish customer loyalty (or inertia), that's the telco model.

After 5 years with Exetel, we are seriously disappointed with being forced off a plan onto one at double the price.
We are considering our position in the light of this. Once plan cost is at the $30 per month level, there are many alternatives.
We have also signed up a number of our clients to Z15 plans. Our group will all consider their positions on this, and not just swallow Exetel's "recommendation".

I have to agree with Brad, loyalty seems to mean very little to Exetel.
I was willing to put up with very little to no coverage at home for $8.00 a month, you are now asking nearly double for even less. It's a joke that you offer 4G for someone that cannot even get 3G at home, looks like it's back to prepaid for me with a Service provider who can actually Service my area. Steve 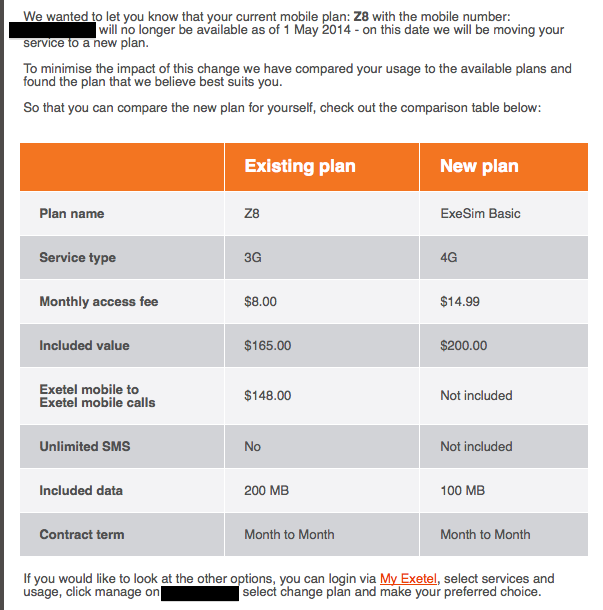 I totally agree with Steves and BradM in the above post, and will be taking ALL my business elsewhere very shortly.
As a customer since 2007 I feel very poorly done by.
As a pensioner now for a year I am even more peed off.
If the foreign owned Optus group are feeling the pinch then maybe they should offer a BETTER sevice outside the major Metro areas and suck a few customers in from Telsta who could not give a cracker either.
Anyway it is time Exetel explained WHY they are increasing plan prices by up to 300% in my case, and who is causing them to do so.
I would have thought that Exetels costs should have reduced now that most of the labour is located offshore in Sri Lanka
Just my 2 bobs worth
Bruce
Top

Why are we being forced to buy 4G plans when a. most regional areas don't have access to 4G and b. I for one don't have a 4G phone and I bet a large percent of people still don't.

Exetel, surely it is still cost effective to offer 3G plans only???
Top

I expect it is a supplier thing. Almost all telcos are moving to 4G-mandatory plans as a way to "value add" to their products. I saw a lot of these 4G-only plans priced around $30+ when evaluating market alternatives; it seems like a very common tactic that telcos are employing. So it is unfortunate, but not entirely surprising
I am a volunteer moderator and not an Exetel staff member. As with all forum posts, mine do not constitute any "official" Exetel position. Support tickets may be logged via https://helpdesk.exetel.com.au or residentialsupport@exetel.com.au
Top

I would like Exetel to confirm that the ExeSim Basic does in fact have 100 MB when I see your very close competitors are offering for the basic mobile plans for $15 with 200MB.

Also could Exetel please advise what the Full Rate Table is for the ExeSim Basic as it doesn't show in our member's facility making it hard to know what we are purchasing. I have sent an email to support who have past it on to sales but nothing yet. I don't think we should have to assume/guess it is the same as the ExeSim Saver.
Top

ExeSim basic allows a data allowance of 100 MB only.

The full rate table under ExeSim saver is applicable for Basic as well.
Top

I'm hoping James reads this and I get some action because my telephone calls and emails to complaints have not worked at all.

I understand the changing times and the fact that the Z8 plans were "too good to be true". Hey, it was nice while it lasted.

I have 3 x Z8 plans and one CAP19 plan that is part of the OT-Free ADSL plan.

Due to the changed nature of the Z8 plans all I need to do is swap one of the mobile phone numbers on the Z8 plan with the number on the CAP19 plan.

Technically, I know this must be a triviality. It should be a simple matter of changing a record in a database. However, I am being met with stubborn resistance by the support staff to even escalate my request to the next highest level - they just keep saying they can't swap numbers with older plans. Well, maybe the support/sales staff can't, but someone in Exetel must be able to. How do I find this someone?

As the change has been forced onto me I think my request is perfectly fair and reasonable. And I can't believe that its technically impossible , a database design that can't cope with this simple request wouldn't be able to run a chook-raffle much less a telco.

I am the OP. Well, I switched to Vaya Mobile. Took 1 day to port the number. Pity that I have to leave Exetel (one bill, etc), but had to do it. I understand why it happened, but still you guys want too much. Hopefully won't have to change you as my Internet provider. Good luck, I really enjoy being with you, but with current mobile pricing I can only hope nothing like that is gonna happen with your other services.
Top

Sorry to move even one service away from Exetel - as a Pioneer I like to support them - but I can see in this case Optus have made changes to the deals they have with their resellers and increased prices or decreased entitlements
But one ex Z15 has been ported to Live Connected Rapid29 plan - I need that 1.5gb monthly data allowance - and I want kb data usage not the mb increments that some companies like Vaya are offering
The other ex Z15 has transferred to Exetels ExeSim Saver @ $19.95 - that one doesn't need a lot of data or calls

bodogbodog wrote:Sorry to move even one service away from Exetel - as a Pioneer I like to support them - but I can see in this case Optus have made changes to the deals they have with their resellers and increased prices or decreased entitlements

I'm not a Pioneer, but I agree with this statement entirely.

I am also sorry to move my mobile services away but I'm going to try out the "Pay As You Go" amaysim service. 90 day credit on prepaid amounts, 12c per min and per SMS (I'm estimating I'll use between $5 and $10 of voice + SMS per month) and I have selected a 10GB data bundle with a 365 day expiry. Amortised over the 12 months, this works out to be about $15 per month and provides much more flexibility over a fixed call and data allowance each month.
I am a volunteer moderator and not an Exetel staff member. As with all forum posts, mine do not constitute any "official" Exetel position. Support tickets may be logged via https://helpdesk.exetel.com.au or residentialsupport@exetel.com.au
Top

That's an interesting option Corey. Do you have a view about Amaysim charging data in 1MB increments. Some complain that chews up their 10GB unexpectedly quickly.
Top
Post Reply
86 posts