There are 6 year and 9 year club threads so how another one? Founded in 2001, Exetel officially began offering Internet services (ADSL1) in February 2004 so the Exetel veterans who have been there since the beginning will have reached their 15 year milestone this year, and will get their 20 year badge in 2024 at the earliest. So for you old folks, this is your chance to shine. Newbies welcome too.

As for me, as the forum registration date may imply, I'll be approaching 15 years next year. After suffering several years of dialup (using cheap $100 per year ISPs and TPG's completely free off-peak Internet), I upgraded to ADSL1 with TPG in 2005. That same year, I churned to Exetel and have been with them since then. In 2008, I moved to ADSL2 and remained with that service for more than a decade. Change will inevitably happen and the catalyst for that change is NBN. ADSL runs on telephone lines and since being informed the copper network will eventually be made obsolete, I decided my best alternative (for the time being) is the home wireless. With Exetel of course.

I think Exetel is a prominent example of a good/service that is cheap/lower-priced/good value but not necessarily nasty - far from it, in fact. As far as I'm concerned, the phrase "you get what you pay for" actually has positive connotations (rather than the usual negative) when referring to Exetel. Of course, you can't please everyone and some users do indeed have valid issues and criticisms. I'm pretty sure I had an issue or three in my time at Exetel. But I think Exetel does a great job of offering lower prices than the competition while doing their best to make sure the other factors (customer service, network stability etc) are held to reasonably high standards. So unless things dramatically and unexpectedly changes for the worse, I'll most likely be back in this thread in 2024 to celebrate 20 years.
Top

Thank you for the kind words, the team here have always done their best to offer the best possible product/service at the lowest possible price point.
Top

I applied on the 24/02/2004. Didn't get connected until mid march. Modem delivery delays. Aaargh. At least the late John Linton was there to help smooth the process. I still have his emails in my archive - answering my complaints about the delayed modem.
I remember being blown away by the jump in speed. Just experienced a similar warp speed jump recently with the change over to nbn. from 6Mbs ADSL 2+ (Yeah, I'm so far away from the exchange it isn't funny) to 46 or so (offpeak)NBN 50 HFC plan.

I remember going for Exetel because we we're kindred spirits i.e. cheap. It was the same price as my dialup with Telstra. They really shook up the market. With all the players these days it is hard to stay ahead, but they've managed. Sometimes coming back to the pack, sometimes pulling away.
What I found is there have been ups and downs, sometimes plans change for the worse. I found if you stuck it out, sometimes a bit longer than I wanted, they'd bring another great plan out. For the most part my experience has been pretty good.

The pioneer discount was also a great idea. No one can touch Exetel with that included. Though something happened with the change over to nbn. I was given some loyalty discount rather than the pioneer which was almost no discount. Billing said they are working on it, hopefully fix it for my next bill.
Top

Signed up 08/2004. The service has been very reliable over the years, since ADSL1 days. STILL waiting for our area to be connected to the NBN though

which I expect I'll do with Exetel.
Top

Ah memory lane time. I was one of the first to sign up and have enjoyed my time with Exetel

I used to love the dialogue with John and Annette Linton and watching them cut the Whirlpool th trolls to bits. I don’t go to the WP Exetel forum so much these days but I’m sure the trolls are still around

I look forward to another 15 years with Exetel

Thank you Bodogbodog for your custom over these years, it is greatly appreciated.
Top

How does one qualify for a "pioneer discount"?
I signed with Exetel Sept, 2005.
Top

I think you could reduce the number of options in the post to take out the 1-5 options - maybe up to 5, up to 10 then 11 onwards?
I’m looking forward to the 20 year club!
Top

.
They have generally been pretty good years I must say.
Top

I joined Exetel in June 2004. For those interested in the pioneer discount that started in 2006, see the attached details that were provided at that time. 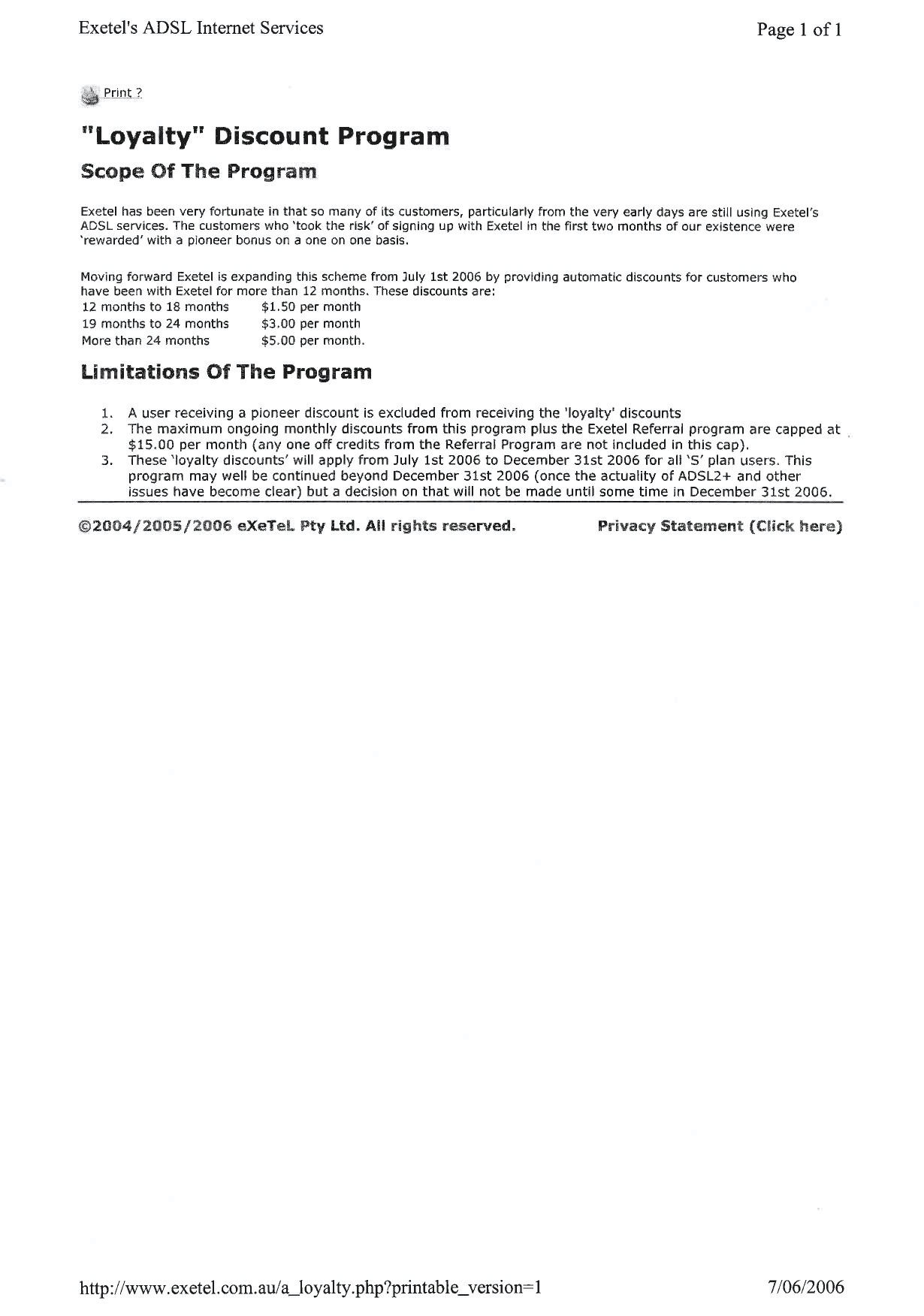 I joined in May 2004. Does that qualify me for a pioneer discount?

They were applied to customers at the time.
Top

True, I had one for a while. But when I moved house (and kept Exetel) it disappeared